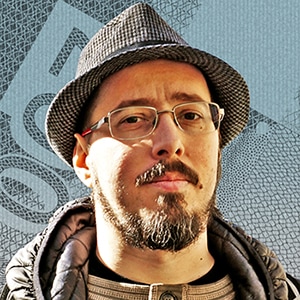 A Brief info about me
A friend of mine once asked me: “Why, of all things, have you chosen to get into the business of banknotes and stamps design?” Here’s my answer: Designing banknotes is about conceiving a graphic image with a mystery, playing a trick on the beholder that will remain concealed to his eye. What has always fascinated me about banknotes is print techniques, protective elements and technical perfection. To me, a note is an exquisite graphic miniature with sophisticated composition.“
I started collecting banknotes when I was six. I liked that they are unique to each country. I held them like precious little treasures. In former Czechoslovakia a new thousand-crown banknote was released in 1986 and once my dad showed it to me, I badly wanted it for my collection. Back then it was a lot of money, therefore he only let me make a drawing of it. The entire family was ecstatic about the outcome, and that’s how I started drawing banknotes. Captivated by life stories of great forgers, I was striving to master all kinds of printing techniques, even inventing some (such as printing from a plaster block), and in the end I took up printing as a major. In high school I worked with banknotes as a visual concept of my own. My buddies and I conceived a whole “private country” – a republic with its unique currency, alphabet, literature, music, and holidays.
After high school there were, naturally, other things to worry about. Our “Community” ceased to exist, but I carried on designing banknotes. A fresh upsurge of enthusiasm overwhelmed me in 2012, prompted by initial considerations of Greek withdrawal from the Eurozone. I promptly designed a 100 drachma note, followed by a whole lot of others.
I was born on July 13, 1977 in Košice. From 1991 to 1995 I studied at Secondary Technical School of Applied Graphics in Bratislava. Later on I was teaching at that same school plus at Print Technology Apprentice School in Bratislava, as a teacher of technical subjects. I married at twenty-two which set my work on an entirely new course. Thanks to my wife, an art historian and librarian, I began to grasp completely new aspects of applied graphics. I discovered scores of inspiring works of art, graphics or otherwise, and got to know visual artists previously unknown to me. Bauhaus, Russian avant-garde, leftist movements and hosts of books on art finally dissociated me from my “forgery period”. My banknotes today represent a vision of the country for which I create it – sometimes paying a tribute to it, other times adding a touch of irony. My banknotes may reflect a bit of history (great historical figures, inventions, natural beauties) or old myths and legends. Nowadays I work as a graphic artist and head of a graphic design department in a private company. In my spare time I design book covers, continue doing graphics as an art form, and design various publications. My most precious time, though, is devoted to graphic design of notes, stamps, bills, coupons, cheques, warrants and the like. The main thing is: It’s fun!  :-)

Work Experience
(Selected)
I’ve graphically designed, typeset and illustrated the three-volume World History (Svetové dejiny) published by Eurolitera, 2007, 2008; I’ve graphically designed the book Svetorzár STRAČINA: Spomienky na hudobného skladateľa (A Composer in Memories), published by Eurolitera, 2010.
I have designed and produced a variety of securities, bills and diplomas for ŠEVT, Slovak Post, Slovak Ministry of Transport, Posts and Telecommunications, auction hall of Numisma Mynthandel Oslo.
Graphic designs on my banknotes are held by collectors all around the globe; one of them was specifically praised in a letter written by former Cuban president Fidel Castro (Consejo de Estado, Rebublica de Cuba).